All | B C D E F H J L O S T | Submit a name
There are currently 18 names in this directory
Ballistic Coefficient (BC)
The ballistic coefficient (BC) of a bullet, is the method of indexing projectiles according to their ability to overcome air resistance during flight, the higher the BC the more aerodynamic the projectile, and the less of an impact wind will have on it.
Barrel
The tube through which the bullet or projectile in a rifle or gun travels when shot.
Base to ogive.
The length of a cartridge when measured from the base of the case to the ogive of the bullet.
Bedding
Bedding a rifle involves filling the gun stock with an epoxy resin (plastic), often reinforced with powder steel particles. The action is then placed into the resin which when dry, creates an exact imprint of the action. The imprint of the action is a precise bedding platform which allows the action to return to the same exact position after recoil with each shot.
Coriolis Effect
Coriolis Effect, named after French mathematician and physicist Gaspard-Gustave de Coriolis, is the effect that the rotation of the earth has on the path of travel of a flying object like a bullet. You may think that the bullet travels so fast and for such a short time, that the rotation of the earth will not matter, but because the earth rotates a full rotation, points closer to the equator, travel much further distance in one day that points closer to the poles. For example, the entire circumference of the earth is about 25,000 miles long, so one point on the equator, travels 25,000 miles in 24 hour. That equates to 1040 miles per hour, or if we speak in the same units we use to measure bullet velocity, it is 1525 fps. So is you are shooting a bullet from a rifle and you are standing on the equator, that bullet is travelling an additional 1525 fps in addition to its muzzle velocity, in whichever direction the earth is spinning. To calculate this, would take hours, thankfully with modern ballistics software, some apps and shooting tech gadgets calculate this difference for you. Do not be concerned though, this hardly has any considerable effect at below 500 yards, so it is only with ultra long range shots that you need to start considering the Coriolis effect on the bullet path also.
Dope
In order to reach the target with his shots, this is the windage and elevation correction that a shooter would dial into his sighting system. Dope is a word that means to work out in English; measure or devise.
Dragging Wood
During precision rifle shooting and training, when a part of your finger or hand is brushing on the stock when you squeeze the trigger, this is called dragging wood, and it can negatively affect your trigger pull, and shot placement.
Extreme Spread
The difference in velocity of the fastest and slowest bullets measured in a single session between cartridges reloaded in the same sitting, or the same recipe for the same rifle.
FFP
First Focal Plane, when referred to in a rifle scope, it is referring to the reticle being in the first focal plane of the scope. So the reticle enlarges when increasing the zoom or magnification of the scope and gets smaller when decreasing magnification. This allows the different dots or markers on the reticle to be the same distance from one another no matter the magnification.
Headspace
The measurement from the breechface to the part of the chamber that keeps the cartridge from moving forward.
Jump
The distance a bullet travels from when it leaves the brass casing, until it makes contact with the lands and grooves of the barrel.
Lands
The place in the barrel where the rifling and grooves start.
OAL (Overall Length)
The full length of a cartridge, from base to tip.
Ogive
The exact point on the bullet where it starts changing from it's full diameter width smaller going down to the point of the bullet,
Sectional density (SD)
When referring to a bullet, the Sectional density (SD) refers to the weight of the projectile relative to its caliber. SD is most often used when comparing the penetrating ability of a projectile in one caliber to another.
SFP
Second Focal Plane. Referring to a rifle scope which has the reticle on the second focal plane so the reticle is not changed when increasing or decreasing magnification as it does not move.
Standard Deviation (SD)
The measure of how spread out your velocity between loads are from the baseline. Difficult to estimate so ES (extreme spread) is often simpler to use.
Trigger
The object which is pulled, to set off the hammer which hits the primer of the cartridge. 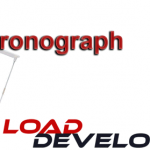 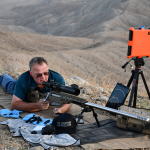 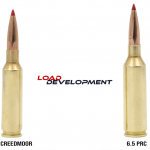 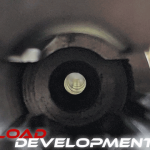 Barrel life, according to most precision shooters is basically the number of rounds expected before the rifle shows inaccuracy of more than one MOA. 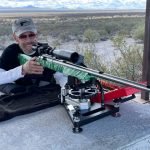 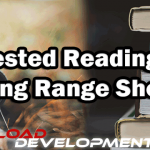